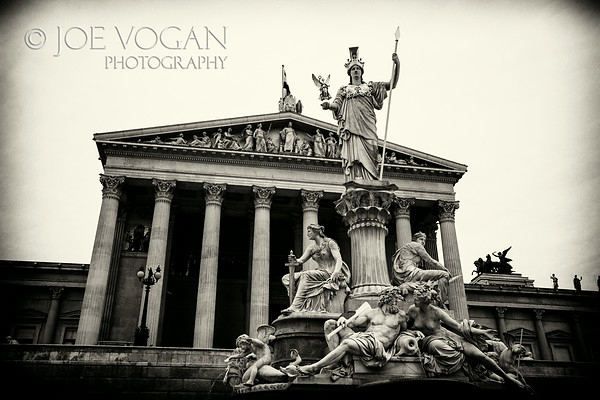 Pallas-Athene Fountain, Austrian Parliament Building, Vienna, Austria Erected between 1893 and 1902 byCarl Kundmann, Josef Tautenhayn, and Hugo Haerdlt, based on the plans by Baron von Hansen. In the middle is a water-basin and a richly decorated base The four lying figures at the foot of Athena are allegorical representations of the four most important rivers of the Austro-Hungarian Empire. They represent at the front the Danube and Inn, in the back part the Elbe and Vltava (German: Moldau) rivers. On the sides are little cupids riding dolphins. The statues of the Danube, Inn, and the cupids were executed by Haerdtl, those of the Elbe and Moldau by Kundmann. The female statues above represent the legislative and executive powers of the state, executed by Tautenhayn. They are again dominated by the Goddess of Wisdom, Athena standing on a pillar. Athena is dressed in armour with a gilded helmet, her left hand carries a spear, her right carries Nike.